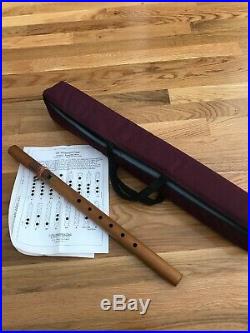 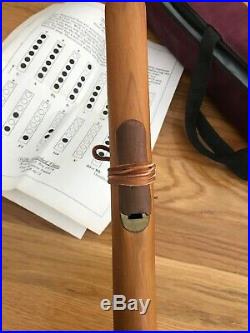 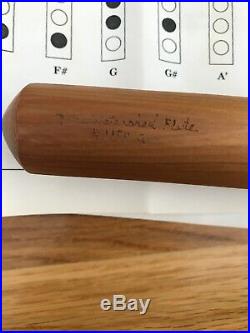 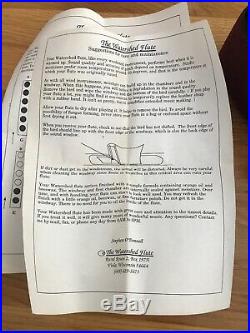 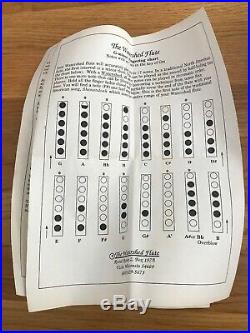 The Watershed Flute, a hand made Native American flute by Stephen ODonnell. Stephen ODonnell was a master woodworker who passed away in a plane crash in 1997. He applied his craft and love of music to the Watershed Flute with enormously successful results. The Watershed Flute is a cross between the Native North American Flute and the European Woodwind. He was a predecessor to flute making in the early 90s. With his passing, it has made his flutes hard to come by and quickly sell to private collectors which are rarely seen listed for sale. This flute is in the key of G Minor and has a different finger tuning than todays Native American Style Flute. This flute comes with the original paperwork showing the care and maintenance of the flute including the finger placement scale chart for Stephen ODonnells particular tuning of the flute. This flute is rare find and a true gem of a flute for the avid collector of Native American Style Flutes. A known performer of the Watershed Flute is Timothy J. Gomez, who has been performing with the Watershed Flute for over 28 years. Other known artists who have used Stephen ODonnells flutes in the past are Jeff Ball and Bill Miller. Comes with a padded case that is a bit dusty. Flute was only played once or twice, over twenty years ago. Please let me know if you have any questions! Comes from a pet, smoke, and bug free home. The item “The Watershed Flute hand made Native American flute by Stephen ODonnell” is in sale since Sunday, November 17, 2019. This item is in the category “Musical Instruments & Gear\Wind & Woodwind\Other Wind & Woodwind”. The seller is “jaimehwkns3″ and is located in Cedarville, Ohio. This item can be shipped to United States, Canada.