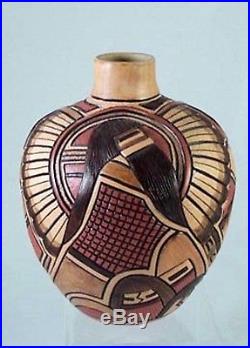 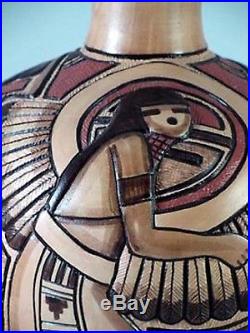 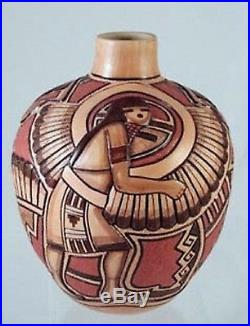 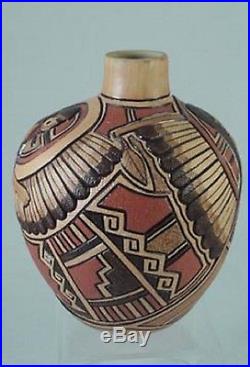 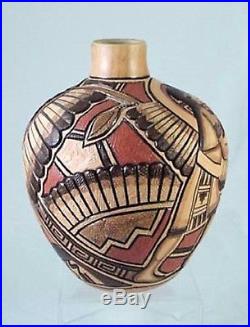 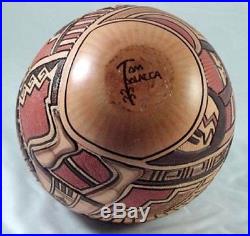 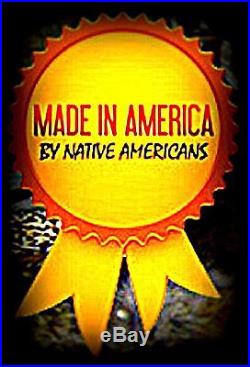 Check out my other items. Be sure to add me to your favorites list. PLEASE VISIT OUR STORE AND CONSIDER SUBSCRIBING TO OUR FREE NEWSLETTER FOR FUTURE LISTING UPDATES. PLEASE SEE DETAILS BELOW: ALL MEASUREMENTS & WEIGHTS ARE APPROXIMATE. Tom’s innovative style is reflected in his relief designs. He, like his grandmother, developed a new approach to Hopi pottery. He skillfully blended traditional elements with a contemporary style. Size: 10.5 in H x 7.5 in D. Once in a while, a piece was produced that was special to Tom. These pieces he called his “museum quality” pieces, and they are distinguishable from the others because on these, and only on these, he engraved his signature into the bottom. You might even say these are Tom’s Signature Series. This is one of those. Every detail has been elaborately etched into the pottery surface. He meticulously made sure that nothing was overlooked, from the delicately ribbed feathers around the rim, to the stone pueblo “bricks” around the bottom. Thomas always did an excellent job of placing symbols of significance throughout his pieces in such an abstract manner, that it requires a great deal of examination and reflection to fully appreciate the hidden nuances. Cloud and storm designs, as well as eagle feathers find their way in and throughout nearly all of Tom’s themes. With his art, as with everything else, he was original. He was an innovator and refused to conform to others’ standards. He had his own vision for everything in life, and he expressed it perfectly in his pottery. His vessels can almost be seen as a metaphor of his life through the years – starting out simply and evolving into something different, something polished, something grand, and something strong. He was never afraid to stand behind his work – he believed in it and cherished the freedom it gave him. He never pretended to be anyone or anything he wasn’t. As one of the first to pioneer the etched style of pottery, Thomas boldly signed using his father’s name: Polacca. Although the art stems back to his grandmother, Nampeyo, whose name he used in the beginning – he was not afraid to be recognized on his own, and in doing so, he carried on the legacy of his other namesake – that of his visionary grandfather, Tom Polacca c. In this way, he combined the best of what his heritage had to offer and paved a way for many who would follow. Tom has been featured in many books and magazines which focus primarily on elite Indian arts. He is mentioned in several prominent works on Hopi pottery, including Hopi-Tewa Pottery: 500 Artist Biographies by Gregory Schaaf, The Art of the Hopi by Jerry and Lois Jacka, Fourteen Families in Pueblo Pottery by Rick Dillingham, and many others. WE LEAVE FAIR AND HONEST FEEDBACK VERY SOON AFTER RECEIVING THE SAME. PLEASE NOTE THAT WE DO NOT OFFER A LOCAL PICK-UP BUT ARE HAPPY TO COMBINE S&H FOR MOST ITEMS. UNLESS AN ITEM IS GROSSLY MISREPRESENTED, ALL SALES ARE FINAL. WE DO OUR BEST TO DESCRIBE OUR ITEMS BUT SINCE WE SELL AUTHENTIC HAND MADE ARTIFACTS, ARTISTIC DIFFERENCES AND PC MONITER COLOR SETTINGS MUST BE CONSIDERED. IF IN DOUBT, PLEASE ASK. Track Page Views With. Auctiva’s FREE Counter. The item “Hopi Indian Made 10.5 Kachina Incised Pot Pottery by Tom Polacca (1935-2003)” is in sale since Tuesday, November 10, 2015. This item is in the category “Collectibles\Cultures & Ethnicities\Native American\ US\1935-Now\Pottery”. The seller is “fargocargo” and is located in Kachina Haven. This item can be shipped to United States.